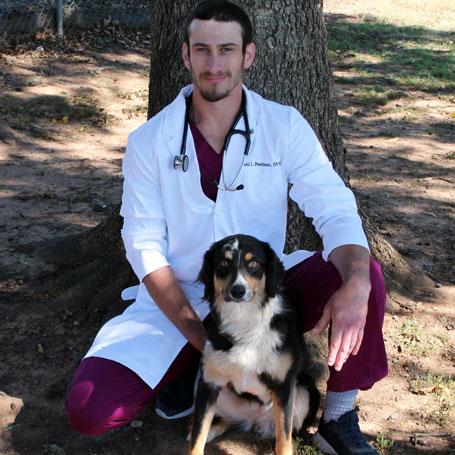 Dr. Reid Pearlman has known that he wanted to be a veterinarian since the age of 10 years old. He grew up in Birmingham and graduated from Vestavia Hills High School in 2014. During his senior year of high school he was admitted to the Early Entry Program at Mississippi State University’s College of Veterinary Medicine and received a full scholarship to attend. In 2018, Dr. Pearlman graduated from State Summa Cum Laude with a degree in chemistry and then went on to graduate from the College of Veterinary Medicine in 2022. Upon graduating, he accepted a job at Animal Care Clinic after interviewing at ACC and many other clinics in the area. His interests in veterinary medicine are diverse, however, he has an especially keen interest in surgery- both soft tissue and orthopedic, pharmacology and feline medicine.

He currently has two critters, a cat named Bean and a dog named Row. Outside of his job, which he greatly enjoys,  you can find him spending time outdoors, particularly fishing and exploring with his dog.